Julia over at 30Boxes writes:

There was an article today in the Wall Street Journal touting Google Calendar as “quick and easy” and although there is a mention of 30 Boxes, we think he is inaccurately portraying Google as the lead innovator in this space

We want anyone out there who really loves 30 Boxes to please set Walt straight. Let him know why you use our product.

Make some noise. Old media shouldn’t have this much power over new media.

No doubt you have already received many emails asking why the lack of coverage for 30Boxes.com. I find disgusting that you choose to profile Google Calendars and simply glance over the rest, calling 30Boxes and others simply “decent offerings”, especially when Google was so late to the field. But just “decent offerings”? Surely you must be joking. I have been using 30Boxes since the end of February and have simply loved it. It has one of the simplest and intuitive interfaces I have ever seen. 30Boxes is also consistently adding new features to their service, features that users have requested. In fact, I would venture to say that 30Boxes is more innovative than Google Calendars because of this. Google has to serve the public at large and I feel they are getting too big for their own good. In short, Google can’t serve more than one master. 30Boxes, on the other hand, is small and nimble. They can afford to make a tweak, try it out, and if it doesn’t work, roll it back. In the end, I see 30Boxes winning. They have it all and they’re willing to risk it all.

In case it matters, I do have a GMail account and I still use 30Boxes.

I’ve been using 30Boxes for almost a week now and love it. I love being able to have my calendar online so I can modify it and love having such an easy interface. I’ve also had MSN Direct for just over a year now. MSN Direct is the front end to SPOT: Smart Personal Object Technology. In short, my watch is like a pager: I can get MSN Messages, the weather, news, quote of the day, this day in, sports scores, stock prices and the real reason I pay $60/year…synchronized calendar. My Outlook calendar syncs to my watch, ensuring that I don’t miss anything critical…which I tend to sometimes do.

There is a work around though! I still have my old server that I don’t really use for anything even though I should. So I decided to put it to good use. I installed Outlook 2003 and, thanks to a heads up from the 30Boxes Blog, I installed Remote Calendars, a “COM-.NET Add-in for Outlook 2003…[that allows a user] to subscribe, reload and delete a generic remote iCalendar (RFC 2445) from Outlook 2003.” Bingo.

I can go to 30Boxes and do my calendar thing. RemoteCalenders automatically checks my iCal feed every once in a while to see if anything has been added. If it has, it loads it into Outlook 2003 and the MSN Direct plugging sends it to my watch. Am I wired (or wireless) or what?

In between studying today (and by “today”, I still mean Friday), I called up MSN and canceled my MSN Direct service for my SPOT watch. Why? I wasn’t using like I used to.

One of the main reasons I got the watch was so I could schedule events in Outlook, have them beamed to my watch, and then not forget them. But once I ditched Outlook, it became harder to do this. I ended up using Outlook exclusively for calendaring and Thunderbird for email. Then I started Beta testing Outlook 2007 earlier in the year. The plugin for Outlook wouldn’t work with the Beta. Around the same time, I started using 30 Boxes. I jury rigged a string of programs on my server to get data to my watch. Finally, I switched over to Google Calendars. With GCal, I was able to send the messages straight to my phone. This was easier and more reliable then my jury rigged solution.

But all of this could have been prevented. How? API.

If Microsoft had an API for the SPOT so that others could write plugins, I would probably still be using my SPOT watch. But in typical Microsoft fashion, the elected to keep SPOT all to themselves. In doing so, they actually hurt their potential user base.

How? Let’s take a look at three examples. In the first example, Bob uses Outlook for his email and scheduling needs. Bob would like to be alerted to appointments he has, so he signs up for MSN Direct and all is good in Bob’s world.

John currently uses Thunderbird, but he’s used Outlook before and wouldn’t mind going back to Outlook so he can use MSN Direct to receive calendar alerts.

Andrew doesn’t like using Outlook for various reasons, but he like getting alerts. If Microsoft had an API for MSN Direct, Andrew could write a script that would send data to his SPOT watch. Andrew would be happy, Microsoft would gain another customer and earn Andrew’s $60. Since Microsoft doesn’t have an API though, they lose Andrew and his $60. If Andrew happens to be an Alpha buyer, they could also loose more potential customers.

I use 30Boxes as my calendar and it’s been work really well, until I got to Boeing. I couldn’t see my calendar! The site would load and I could see the header and footer, but the actual calendar was nowhere to be found. Curious.

I had no idea why this was happening, except maybe the proxy server was tweaking some of the HTML on the way to my system. So I tried using the Mines HTTP VPN portal to see if that would make a difference. It did: I could now see the default calendar. But I couldn’t log in.

So I tried to view the site straight on the Internet (without using the Mines VPN portal), and it worked! Weird.

This is cool! It takes a URL’s HTML code and converts it into a tree view and then color codes it. Here’s a snapshot of my page just before this post:

and here’s the HTML tree: 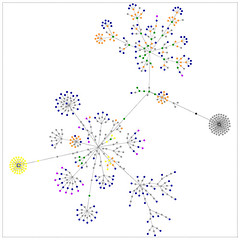 Everyday, we look at dozens of websites. The structure of these websites is defined in HTML, the lingua franca for publishing information on the web. Your browser’s job is to render the HTML according to the specs (most of the time, at least). You can look at the code behind any website by selecting the “View source” tab somewhere in your browser’s menu.

HTML consists of so-called tags, like the A tag for links, IMG tag for images and so on. Since tags are nested in other tags, they are arranged in a hierarchical manner, and that hierarchy can be represented as a graph. I’ve written a little app that visualizes such a graph, and here are some screenshots of websites that I often look at.

I’ve used some color to indicate the most used tags in the following way:

blue: for links (the A tag)
red: for tables (TABLE, TR and TD tags)
green: for the DIV tag
violet: for images (the IMG tag)
yellow: for forms (FORM, INPUT, TEXTAREA, SELECT and OPTION tags)
orange: for linebreaks and blockquotes (BR, P, and BLOCKQUOTE tags)
black: the HTML tag, the root node
gray: all other tags

On The Docket is Back

On the Docket is back using a bit of JavaScript to display my classes and the 30Boxes.com plugin for anything else. Enjoy!

A 30-something electrical engineer. I am for God, against the status quo, an enginerd. Lutheran (LCMS). I excel at awkward and problem solving. Seattle native, former expat in

. Married to @fergiepants. We have a dog. And a child. And another child. This is the story of me: My hopes, my dreams, my aspirations. My trials and tribulations. My life.